The Problem with Forensics in American Courtrooms

The problem with forensic science In 2009, a study funded by the United States Department of Justice exposed the massive problems with forensic science being admitted into courtrooms across America. Unfortunately, these problems still exist. In 2015, the FBI released devastating news. The FBI determined that the government has sponsored laboratory witnesses who testified wrongly in 33 death penalty cases. The study was too late for nine cases where the execution had already occurred. For five of the cases, the ... END_OF_DOCUMENT_TOKEN_TO_BE_REPLACED

Memorial Day weekend begins the boating season throughout the United States.  Enjoying warmer weather with friends and family on beautiful waterways combined with drinking alcohol is an American pastime.  It is not illegal in most states to consume alcohol while driving a boat.  Boaters need to be responsible to ensure that their Memorial Day cheer does not put a dent in their career.  Law enforcement announced increased BWI and BUI enforcement nationwide.  Law enforcement stop boaters for water safety checks without ... END_OF_DOCUMENT_TOKEN_TO_BE_REPLACED

What are judges and prosecutors concerned with on a DWI? One of their main concerns is recidivism. Contrary to popular belief, the average rate of repeat for a first time DWI is approximately 21%[i]. Most first time DWI offenders made a mistake. They will never be back in the system. In fact, most are going to punish themselves far greater than what a court or prosecutor could do to them. Does BAC (blood alcohol concentration) on their DWI predict ... END_OF_DOCUMENT_TOKEN_TO_BE_REPLACED

On December 15, 2014, the United States Supreme Court handed down a monumental case in the world of criminal justice. The U.S. Supreme Court declared in Heien v. North Carolina that ignorance of the law for a police officer is indeed an excuse justifying an otherwise invalid traffic stop. On April 29, 2009 shortly before 8:00 am, Sergeant Matt Darisse of the Surry County Sheriff’s Department pulled over Nicholas Heien on Highway 77 for having a brake light out. This ... END_OF_DOCUMENT_TOKEN_TO_BE_REPLACED

A couple of weeks ago, a colleague in Tarrant County asked if anyone had a voir dire (jury selection) PowerPoint template for a trial where an accused intoxicated person was parked and not driving. When I volunteered mine, I was shocked and dismayed at how many lawyers had this same type of case. So incensed at the folly of prosecuting people who pull over and try to do the right thing, I gave one of my new associates a project. ... END_OF_DOCUMENT_TOKEN_TO_BE_REPLACED

“In politics, stupidity is not a handicap.” -Napoleon Bonaparte Studying history helps to understand how governments utilize federal agencies, police departments, and courts to perpetuate illegal witch hunts for political causes. Let’s look at the 6 million Jews who were killed in Europe by the German government. People forget that it was not renegades who caused the Holocaust but the politicians and the courts. The parallels between the successful government campaigns of the Nazis in World War II and today’s DWI ... END_OF_DOCUMENT_TOKEN_TO_BE_REPLACED

Involuntary Intoxication Reality: Texans Be Alarmed ! “I no longer knew what was real and what wasn’t. The lines between reality and delusion had become so blurred.” ― A.B. Shepherd, The Beacon This is what has happened to judges in courts across Texas when it comes to DWI charges. The penal code was created to punish crime and thereby deter others from committing the same crime. Most crimes involve people making bad moral choices, choices that hurt others. Most crimes ... END_OF_DOCUMENT_TOKEN_TO_BE_REPLACED 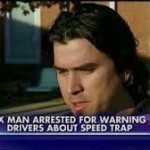 Man gets arrested for warning drivers about upcoming speed traps. He is also against how the speed traps are being enforced (cops hiding behind signs and jetting out weaving in and out of traffic to catch the speeders is more dangerous than most of the speeding driving they are pursuing). My two cents: this is a free country, he has a right to protest, and he makes a good point. I realize most cities now earn a necessary part of ... END_OF_DOCUMENT_TOKEN_TO_BE_REPLACED

“In an authoritarian State it is considered permissible to alter the truth; to rewrite history retrospectively; to distort the news, suppress the true, add the false. Propaganda is substituted for information. In fact, in such a country you are not a citizen possessor of rights but a subject, and as such you owe to the State fanatical loyalty and supine obedience.”   Bottom line, our law enforcement, district attorneys and judges have lost reason for the propaganda machine of MADD ... END_OF_DOCUMENT_TOKEN_TO_BE_REPLACED

It is not surprising that every year 1.4 million Americans are diagnosed with cancer1, the second leading cause of death next to heart disease. It should be surprising that there are also approximately 1.4 million DWI/DUI arrests (1 of every 139 license drivers) in the country a year with 16,685 alcohol related fatalities in 2005. “Alcohol related” fatalities defined as at least one driver or nonoccupant involved in the crash having a blood alcohol concentration of .01 grams per deciliter ... END_OF_DOCUMENT_TOKEN_TO_BE_REPLACED