duinewsblog.org is your source for the most up to date DUI News serving attorneys, lawyers and the general public

Police Credibility Being Challenged In DUI

I once talked to a criminal defense attorney who told me in the late ’60’s he won 17 consecutive motions to suppress evidence based on Fourth Amendment violations committed by the police. Many DUI defense attorneys have not prevailed on that many motions to suppress evidence in their careers. What happened is that our courts became packed with conservative judges following the ouster of Rose Bird and two of her colleagues on the California Supreme Court. Voters in California were ... END_OF_DOCUMENT_TOKEN_TO_BE_REPLACED

Law enforcement DUI investigation techniques depend largely upon the fictitious premise that all humans are physiologically identical. Without that presumption, field sobriety and breath alcohol tests would not be possible. There are, of course, many examples of physiological differences — from person to person and within one person from moment to moment — which will directly alter breath or blood alcohol testing in DUI investigations. A few examples are diabetes, GERD (acid reflux), anemia — even sex and race create ... END_OF_DOCUMENT_TOKEN_TO_BE_REPLACED

The California State Bar has issued a formal opinion about misleading representations by attorneys on their websites and blogs (Formal Opinion Interim No. 12-0006) and the reason is that too many lawyers are making claims that have no basis in reality. Some claim to be recognized as one of the “Top 100 Trial Lawyers In America” but fail to mention that they simply paid $375.00 for the logo and trophy and did nothing to earn the purported distinction. Another popular ... END_OF_DOCUMENT_TOKEN_TO_BE_REPLACED

One evening at a restaurant, Martha shares a bottle of wine with a friend.  She nurses one glass over a one-hour dinner.  Nearing the end, another glass is poured from the bottle and she finishes this.  The two friends then order an after-dinner drink.  Noting the time, Martha quickly finishes the drink and leaves.  She is stopped by the police one block from the restaurant.  After questioning and field sobriety tests, she is taken to a police station and tested on a breathalyzer.  The machine shows ... END_OF_DOCUMENT_TOKEN_TO_BE_REPLACED

Know What To Say If Arrested For DUI

Most DUI suspects in California know they have the right to remain silent. They have heard it countless times on television but can have difficulty exercising the right if they have been drinking. If they decide to talk to the police they can be misquoted or have their statements misinterpreted. Most of the time it is best to just say nothing. That was until the California Supreme Court’s recent decision in People v. Tom (Docket No. S202107 – August 14, ... END_OF_DOCUMENT_TOKEN_TO_BE_REPLACED 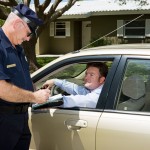 As with the odor of alcohol on the breath, few DUI police reports will fail to include an observation by the arresting officer that the drunk driving suspect  exhibited “slurred speech”.  It is a standard criteria for detecting alcohol impairment.  The officer fully expects to hear slurred speech in a person he suspects is under the influence, particularly after smelling alcohol on the breath, and we tend to “hear” what we expect to hear. And hearing it supplies the officer ... END_OF_DOCUMENT_TOKEN_TO_BE_REPLACED

Police Stop Based On 911 Call

In Navarette v. California, the United States Supreme Court recently addressed the constitutionality of police stopping a motorist based on an anonymous 911 call. The decision holds that it depends on the “totality of the circumstances.” In this particular case, the enforcement stop was deemed constitutional based on the following facts: Use of 911 system (suggestive that caller was not concerned about report being traced back to him); Detailed description of driving which was consistent with the driving of an ... END_OF_DOCUMENT_TOKEN_TO_BE_REPLACED

The United States Supreme Court dealt another blow to the 4th Amendment’s protection against unreasonable search and seizures when it delivered a deeply divided opinion, declaring that a vehicle may be stopped based on an anonymous 911 tip. Justice Clarence Thomas delivered the opinion of the Court in which Justices Kennedy, Breyer and Alito joined. Justice Scalia, with a keen perspective on reality wrote a well-reasoned and scathing dissent. He was joined by the Justices Ginsburg, Sotomayor and Kagan. An ... END_OF_DOCUMENT_TOKEN_TO_BE_REPLACED

Breathalyzers don’t actually measure alcohol. That’s right.  What they actually detect and measure is any chemical compound that contains the methyl group in its molecular structure.  There are thousands of such compounds — including quite a few which can be found on the human breath. And this machine that determines a person’s guilt or innocence in a DUI case will “see” all of those chemicals as alcohol — and report a falsely high blood-alcohol concentration (BAC). Most breath machines used ... END_OF_DOCUMENT_TOKEN_TO_BE_REPLACED With Super Bowl Sunday upon us, law enforcement agencies throughout California will be participating in DUI Checkpoints this evening. Ever since these warrantless stops were sanctioned by the California Supreme Court and the United States Supreme Court under very strict guidelines, officers have pushed the envelope with respect to the questions they ask and the basis upon which they further detain motorists for field sobriety testing.  In many of these DUI Checkpoint operations, officers ask overly intrusive questions such as ... END_OF_DOCUMENT_TOKEN_TO_BE_REPLACED