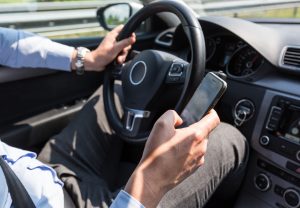 Under current Ohio law, a driver may be charged with Driving While Texting if the driver is stopped for another offense and the officer discovers the driver was texting while driving.  However, a police officer is not permitted to initiate a traffic stop based on the officer’s suspicion that a driver was doing so.  As of April 3, 2023, officers will be authorized to stop a vehicle if the driver is using, holding, or physically supporting an electronic wireless communications device.

The New Law
The new law is a revision of Ohio Revised Code section 4511.204.  That section makes it unlawful to drive a motor vehicle while using a handheld electronic wireless communications device to write, send, or read a text-based communication.  The law has exceptions which include texting during emergencies, texting while stationary and outside the lane of travel, and hands-free texting.  The current statute specifically states law enforcement officers may not stop an automobile, “for the sole purpose of determining whether a violation of [this law] has been or is being committed”.

The new law, part of Senate Bill 288, makes substantial changes to section 4511.204.  Rather than prohibiting only texting, the revised statute prohibits, “using, holding, or physically supporting with any part of the person’s body, an electronic wireless communications device.”  There are 13 exceptions to this prohibition, including using a device:  for emergencies, while stationary, to make hands-free calls, and for hands-free navigation.

The most significant revision to the statute is the removal of the language which prohibits officers from stopping a vehicle “for the sole purpose of determining whether a violation of [this law] has been or is being committed”.  That paragraph is deleted in the new law.  Instead, the law says officers may not stop a driver for violating this law unless the officer, “visually observes the operator using, holding, or physically supporting with any part of the person’s body, the electronic wireless communications device.”

In Ohio OVI cases, we often litigate whether the traffic stop was justified.  Most commonly, stops are justified by moving violations such as speeding, weaving out of the marked lane, and running a stop sign or traffic light.  When the new law takes effect, officers will have an additional potential justification for stopping vehicles.  If an officer visually observes a driver holding a cell phone or “physically supporting [it] with any part of the person’s body”, the officer will be permitted to initiate a stop.  That stop may lead to an investigation for operating a vehicle under the influence.

Penalties for Violating the New Law
Violating the current version of R.C. 4511.204 is a minor misdemeanor, punishable by a fine of up to $150.  Violating the new version of R.C. 4511.204 will be an unclassified misdemeanor, punishable by a fine of up to $150, two points on the person’s driver license, and community control (probation) for up to five years.  In addition, the sentence can be enhanced if the driver has prior convictions for violating this law within two years and if the offense is committed in a construction zone.

If a driver is charged with this offense in the context of an OVI case, the penalties for this offense are the least of the driver’s problems.  The penalties for a first-offense OVI are much more severe:  a fine of up to $1,075, a license suspension for up to three years, and a jail term of up to six months.