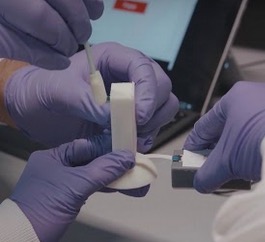 Regular readers of this blog know that I try to keep them informed about new methods of detecting marijuana (THC) in the body of drivers.  For instance, you may wish to review my 2019 post here and my 2015 post here.  In addition to breath tests, a saliva test has now been studied.  If perfected, this method will likely be used by law-enforcement officers as part of their investigatory procedures to determine if someone is driving under the influence of an intoxicant or combination of intoxicants.

Forbes has reported on this new method of detection developed by Shalini Prasad, Ph.D.  The report states that, “[r]esearchers at the University of Texas, Dallas engineered THC sensor strips as well as an electronic reader. The strips contain two electrodes which have been coated with an antibody that binds THC, isolating it from other compounds found in saliva. …

Once saliva is put on the test strip, that strip is then put in a reader where electricity is applied. The THC on the strip will behave differently than just saliva, causing a difference in electrical current and allowing the amount of THC in that person’s body, or specifically their saliva, to be measured, similar to how a diabetic might test their blood sugar level. Early tests of the device have found that it’s accurate for THC levels ranging from 100 picograms per milliliter to 100 nanograms per milliliter.” The entire test takes less than five minutes.

A video explaining how the test works is shown below.

While the test is not yet ready for use in the field, it shows promise as a test that could be performed during a traffic stop.

He is the author of DUI: The Crime & Consequences in Tennessee, updated annually since 1991 (Thomson-West), and co-author with Lawrence Taylor of the national treatise, Drunk Driving Defense, 8th edition (Wolters Kluwer/Aspen).  Steve has served as an adjunct professor at the University of Tennessee Law School since 1993 and has received a number of prestigious awards for his faculty contributions.  He is a popular international speaker, having spoken at legal seminars in 30 states, the District of Columbia and six foreign countries.  After being named a Fulbright Scholar, Steve was honored to teach as an Adjunct Professor at the University of Latvia Law School in the capital city of Riga, Latvia during the Spring Semester of 2019.  If you would like to contact the author, please visit his website.