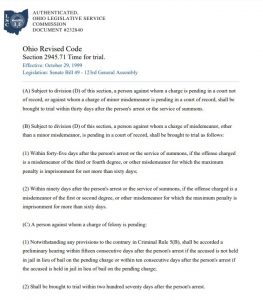 DUI cases (called ‘OVI’ in Ohio) have time limits.  The Sixth Amendment to the United States Constitution gives everyone the right to a “speedy and public trial”.  In addition to the Constitutional time limits, there are statutory time limits imposed by state legislatures.  In Ohio, the trial for an OVI must generally be held within 90 days.  For cases in which there is a delay in obtaining blood and urine test results, the question is when the speedy trial clock starts.  That question was recently answered by the Ohio Supreme Court.

Ohio’s Speedy Trial Statute
Ohio Revised Code section 2945.71 states a person charged with a first-degree misdemeanor, such as OVI, must be brought to trial within 90 days of the person’s arrest (or summons).  That 90-day time limit may be extended for reasons stated in Ohio Revised Code section 2945.72, and each day a person is in jail on the OVI charge counts as three days.

How does the lengthy wait for test results affect the speedy trial calculation for the second charge?  Does the speedy trial clock still begin on the day of the defendant’s arrest?  That question was answered by the Ohio Supreme Court in State v. Sanford.

State v. Baker
To answer the question in State v. Sanford, the Court looked to the rule created by State v. Baker.  In Baker, a pharmacist was investigated for selling prescription drugs illegally and charged with Drug Trafficking.  After auditing Baker business records, the government charged Baker with additional charges of Medicaid Fraud.  When Baker was not brought to trial on the Medicaid Fraud charges within the time limit for the Drug Trafficking charges, he claimed a speedy trial violation.

The Ohio Supreme Court concluded, “when additional charges arise from facts distinct from those supporting an original charge, or the state was unaware of such facts at that time, the state is not required to bring the accused to trial within the same statutory period as the original charge”.  As the facts underlying the charges of Medicaid Fraud were different from the facts underlying the charge of Drug Trafficking, and the state was unaware of the facts for the Medicaid Fraud charges, the speedy trial clock for the new charges did not start running until Baker was summoned to court on the new charges.

State v. Sanford
In State v. Sanford, the Ohio Supreme Court applied the Baker rule to OVI charges (among others).  The Court reasoned that the government was unaware of the facts supporting the charge of OVI ‘per se’ at the time Sanford was arrested and did not become aware of those facts until law enforcement received the blood test results indicating the level of THC metabolites in Sanford’s blood was ‘over the limit’.  Therefore, the speedy trial clock for OVI ‘per se’ did not start running when Sanford was arrested.  Instead, the Court concluded, the speedy trial clock began running when Sanford was summoned to court on the new charges.