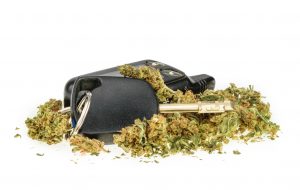 A recent New York Times article answers this question:  “I know all about the dangers of driving while drunk.  But is driving while high on marijuana as dangerous?”  The author discusses the possible dangers of driving under the influence of marijuana.  Studies on marijuana-related driving impairment have produced inconsistent results, so the true danger is unknown.  What is known is THC blood levels are not correlated with driving impairment.

Dangers of Driving High
The Times article outlines the reasons marijuana can impair driving ability.  First, the paranoia sometimes experienced with a marijuana high could lead to a panic attack while driving.  Second, marijuana may alter a person’s sense of time, making it appear things are moving more slowly than they really are.  Third, a person high on marijuana may have an altered perception of what is and is not safe.  Although not mentioned in the article, marijuana is also known to affect visual processing, short-term memory, and psychomotor speed.

Research on Driving High
Scientific studies on the correlation between marijuana use and driving impairment heave yielded inconsistent results.  A 2021 article by Ulrich Preuss, et. al in Frontiers in Psychiatry reviewed studies, meta-analyses, and other relevant papers on the link between marijuana use and the risk of car crashes.  The article also addressed the effect of different concentrations of THC on the risk of automobile collisions.  The authors observed that, “results on the relationship between driving performance and traffic crash risk under the influence of cannabis revealed inconsistent findings”.  The article also states:

Findings show that meta-analyses and culpability studies consistently indicate a slightly but significantly increased risk of crashes after acute cannabis use.  These risks vary across included study type, crash severity, and method of substance application and measurement.  Some studies show a significant correlation between high THC blood concentrations and car crash risk.  Most studies do not support this relationship at lower THC concentrations.  However, no scientifically supported clear cut-off concentration can be derived from these results.

Danger of Relying on THC Levels
Marijuana impairment is not closely correlated with certain THC levels.  As the National Highway Traffic Safety Administration observed in Marijuana-Impaired Driving:  A Report to Congress:

A recent study by the National Institute of Justice announced the same verdict.  The researchers compared participants’ performance on psychomotor tests to their THC levels.  The study report states, “None of the targeted analytes in any biological sample correlated well with impairment measures for either route of administration.”  The report concludes, “Our work indicates that THC is not a reliable marker of cannabis impairment.”

Prosecuting High Drivers
Although THC levels do not correspond with impaired driving, governments prosecute drivers for DUI based on THC levels in the drivers’ bodily fluids.  When this occurs, DUI defense lawyers should utilize the above-cited studies to demonstrate the error of relying on THC levels to prove impairment.