Home / Ohio DUI News / Can You Get a DUI/OVI on a Horse-Drawn Buggy in Ohio?

Can You Get a DUI/OVI on a Horse-Drawn Buggy in Ohio? 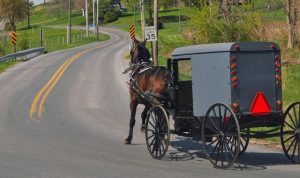 Imagine a person in the process of being charged with DUI (called ‘OVI’ in Ohio).  I’ll bet you are imagining a person driving a car, or maybe another motorized vehicle.  You are probably not imagining a person on a buggy.  What does Ohio law say about non-motorized vehicles?  Can a person be charged with OVI on one of those?  An Ohio man recently learned the answer is ‘yes’, at least for a horse-drawn buggy.

Reckless Operation of a Horse and Buggy
According to Cleveland19.com, deputies in Ashtabula County, Ohio were dispatched on the report of a man recklessly operating a horse-drawn buggy.  The man was reportedly driving on the wrong side of the road, and deputies observed him slumped-over at the helm of the buggy with a beer nearby.  When deputies tried to corral the one-horsepower vehicle, it didn’t stop.  When the buggy finally did come to rest, the horse lunged, and the buggy collided with the police cruiser.  The driver was treated for minor injuries and charged with OVI.

Operation in Ohio
In Ohio, there are multiple elements which must be proven before a person can be convicted of OVI.  One of the elements is ‘operation’.  The prosecution must prove the defendant ‘operated’ a vehicle and, at the time of the operation, the person was ‘over the limit’ or ‘under the influence’.  But are a horse and buggy ‘operated’ by the driver?  In Ohio, the answer is ‘yes’.  Ohio Revised Code section 4511.01(HHH) states, “Operate’ means to cause or have caused movement of a vehicle, streetcar, or trackless trolley”.  As the driver causes movement of the buggy by directing the horse’s locomotion, the driver ‘operates’ the horse and buggy.

“Vehicle’ means every device, including a motorized bicycle and an electric bicycle, in, upon, or by which any person or property may be transported or drawn upon a highway, except that “vehicle” does not include any motorized wheelchair, any electric personal assistive mobility device, any low-speed micromobility device, any personal delivery device as defined in section 4511.513 of the Revised Code, any device that is moved by power collected from overhead electric trolley wires or that is used exclusively upon stationary rails or tracks, or any device, other than a bicycle, that is moved by human power.”

So is a horse and buggy a ‘vehicle’?  A person or property may be transported on them, and they are not listed in the statute as exceptions to the definition of ‘vehicle’, so it appears the answer is ‘yes’.  However, it also appears there is a distinction between the horse and the buggy.

To be a ‘vehicle’, an object on which a person or property may be transported must be a ‘device’.  The term ‘device’ (surprisingly) is not defined in Title 45 of the Ohio Revised Code.  According to the Merriam Webster definition, a device is, “a piece of equipment or a mechanism designed to serve a special purpose or perform a special function”.  Based on that definition, a buggy is a ‘device’, while a horse is not a ‘device’.  Accordingly, a buggy is a ‘vehicle’, but a horse is not.