Home / Tennessee DUI News / Do Police Have to Get a Search Warrant to Obtain the Blood of an Unconscious Driver?

Do Police Have to Get a Search Warrant to Obtain the Blood of an Unconscious Driver? 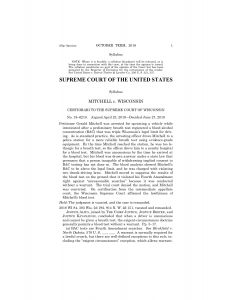 Have you ever wondered whether a police officer needs to request a search warrant when attempting to obtain a blood sample from an unconscious suspected drunk driver?  The United States Supreme Court recently answered that question.  The Court agreed that there is no question that our Fourth Amendment constitutional right against unreasonable searches and seizures applies when blood is taken from the body of a person suspected of driving under the influence (DUI, DWI, or OUI). However, the Court was quick to recognize that certain exceptions apply to that constitutional right. One of those exceptions applies when exigent circumstances exists that makes it difficult or impossible for an officer to obtain a warrant.

On June 27, 2019, the United States Supreme Court issued an opinion ruling that the exigent–circumstances exception to our Fourth Amendment right applies when a suspected drunk driver is unconscious. This case, Mitchell v. Wisconsin, specifically held that,

“When a breath test is impossible, enforcement of the drunk-driving laws depends upon the administration of a blood test. And when a police officer encounters an unconscious driver, it is very likely that the driver would be taken to an emergency room and that his blood would be drawn for diagnostic purposes even if the police were not seeking BAC information. In addition, police officers most frequently come upon unconscious drivers when they report to the scene of an accident, and under those circumstances, the officers’ many responsibilities—such as attending to other injured drivers or passengers and preventing further accidents—may be incompatible with the procedures that would be required to obtain a warrant. Thus, when a driver is unconscious, the general rule is that a warrant is not needed.” (Emphasis added)

Of course, some states, such as Tennessee, have constitutions or legislation providing greater personal protections than those provided by the federal constitution.  Under current Tennessee law, for instance, Tennessee Code Annotated Section 55–10–406(i) requires a search warrant or a recognized exigent circumstance exception to apply before obtaining a blood sample from an unconscious driver without a search warrant.