Home / Tennessee DUI News / How Drunk is Your State?

How Drunk is Your State? 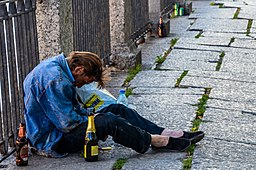 By Ralf Steinberger from Northern Italy and Berlin [CC BY 2.0 (http://creativecommons.org/licenses/by/2.0)], via Wikimedia Commons

The article then lists every state in the United States in descending order from the least “drunkest” state to the most “drunkest” state. The criteria used to determine the ranking of each of the “drunkest” states is the percentage of adults drinking “excessively” (information provided to the CDC and then reviewed by the writer of the USA Today article). Nationwide, as the article explains, 18.0% of American adults drink an excessive amount of alcohol.

According to the rankings, the least “drunkest” State in the United States is Tennessee where only 11.2% of the adults drink alcohol to an excess while North Dakota tops the list with 24.7% of the adults drinking alcohol to an excess. Obviously, the article demonstrates that excessive alcohol drinking remains a major problem in the United States. The article does not address driving under the influence/driving while impaired (DUI) cases, but obviously, one should not drink to excess and then attempt to drive. If you or anyone you know has an alcohol consumption problem, please seek help before hurting yourself, or others.

The author would like to thank his law partner, Arrin “AZ” Zadeh, for his contributions to this article.

Previous: DUI Conviction? No Booze for You!
Next: Deputies: Collier County teacher arrested for DUI