Third and Subsequent DUI Offenders Not Allowed To Purchase Alcohol? 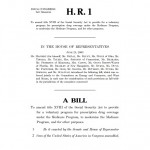 Public domain photo of a legislative bill courtesy of the US Gov’t. & Wikipedia

Because the number of people receiving their third DUI (Driving Under the Influence) offense is growing (751 persons in 2014 and 900 expected in 2015), Tennessee lawmakers have devoted much time and effort toward reducing the number of people who violate Tennessee Driving Under the Influence laws for a third or subsequent time. One solution has come in the form of a new proposed law.

Endorsed by both parties, this legislative bill would ban people convicted of a third or subsequent DUI offense from purchasing alcoholic beverages, including intoxicating liquors, wine, and beer. Neither the Senate nor House versions of the Bill appear to limit the length of time of the purchase prohibition.

Judges would be required, as part of sentencing the defendant, to revoke alcohol-buying privileges for these persons. Moreover, those convicted of their third DUI offense would have a designation on their driver’s license or state ID, noting that it is illegal for that particular person to buy alcohol. This bill should come before the full judiciary committee during the third week of March 2015.

While this bill may operate as a deterrent for some individuals, it is questionable whether the bill will actually curb a DUI offenders’ ability to obtain alcohol. Just because an individual cannot lawfully purchase alcohol does not mean that the person cannot obtain alcohol and subsequently become intoxicated.

As a result, these bills may prove unsuccessful at achieving the legislators’ intended goal. In effect, the legislation may keep no more third time DUI offenses from occurring than without the bill. However, the bill might just make it more difficult for third-time offenders to secure alcohol.

The author would also like to recognize and thank Kaya Porter, a second year law student at the University of Tennessee College of Law, for her research and editing contributions of this article.