TEXTING VS. DRINKING WHILE DRIVING: LOL OR SOL?

On November 8, 2014, University of Oregon linebacker Joe Walker returned a fumble one hundred (100) yards against the University of Utah for a touchdown.[1] Both football fans and the National Highway Traffic Safety Administration (NHTSA) agree—this is a long distance. A NHTSA report states that “sending or receiving a text takes a driver’s eyes from the road for an average of 4.6 seconds, the equivalent—when traveling at 55 mph—of driving the length of an entire football field while blindfolded.”[2] Despite the inherent dangers of intoxicated driving, NHTSA alleges that texting while driving makes teenage drivers twenty-three (23) times more likely to crash.[3]

Thirty-nine (39) states have banned texting while driving, which the Harvard Center for Risk Analysis Study attributes to over 3,000 deaths and 33,000 injuries per year.[4] Car and Driver Magazine tested individuals’ reaction times on a closed road course while sober, at the legal intoxication limit of .08, reading a text, and sending a text.[5] A red light in the vehicle indicated when the driver should brake while driving at speeds of 35 mph and 70 mph. Each trial tested the driver’s reaction to the signal five times, with the slowest reaction time (the amount of time between the activation of the light and the driver hitting the brakes) dropped from consideration and averaged the remaining four trials’ results.[6] The results under each condition (intoxicated, reading and writing a text) are displayed below with their sober, undistracted performance being the baseline.  The attribution for the “Worst Results” chart below is noted in the following footnote.[7] 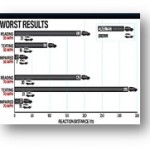 Ultimately, texting had the most substantial, negative effect on the test drivers. While drunken or drugged driving has been the focal point of major regulations, texting has quickly become a hazard to traffic safety. For instance, intoxicated driving fatalities have decreased approximately 25% between 2002 and 2011, whereas texting fatalities have increased significantly.[8] Some studies equate texting’s effect while driving to that of a driver after consuming four beers.[9]

Similar to how intoxicated driving may be prevented by using designated drivers, texting related incidents may be prevented by responding after a safe arrival or using hands-free communication devices such as Bluetooth. In the future, it can be expected that more states will provide more stringent texting regulations. For instance, in New Jersey, cell phone use while driving is “unlawful except when the telephone is a hands-free wireless telephone” and is enforced by fines up to $800 for repeat violators.[10] Of course, state laws vary on this subject, so be aware of the applicable penalties and relevant repercussions in your state.

[7] Id. (There were two test drivers that are represented by the brown and white vehicles labeled “Alterman” and “Brown” respectively.)

[9] Strayer, Drews, Couch, A Comparison of the Cell Phone Driver and the Drunk Driver, University of Utah (2006), available at http://www.distraction.gov/download/research-pdf/Comparison-of-CellPhone-Driver-Drunk-Driver.pdf.

Previous: New DUI Bills presented by the 2015 West Virginia Legislature
Next: Woman sues after police put a bag over her head, put her in a chokehold and forcefully drew blood.