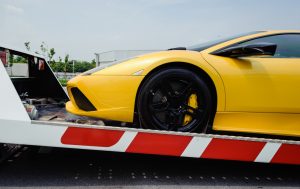 In Ohio, one consequence of repeat DUI convictions (called ‘OVI’ in Ohio) is immobilization or forfeiture of the vehicle driven by the defendant at the time of the offense.  Those sanctions are imposed if the vehicle is in the defendant’s name.  For a second offense within ten years, the vehicle is immobilized for 90 days.  For a third offense (or more) within ten years, and for a sixth offense (or more) within 20 years, the vehicle is forfeited.  The Constitutionality of vehicle forfeiture is addressed in the recent case of is State v. O’Malley.

What are the Constitutional Issues?
The O’Malley decision addresses two Constitutional issues.  The first issue is whether the Equal Protection Clause of the Fourteenth Amendment is violated when defendants are treated differently depending on whether they own the vehicle driven at the time of the offense.  The second issue is whether the Excessive Fines Clause of the Eighth Amendment is violated when the government permanently takes a defendant’s vehicle.

What are the Facts of the Case?
A trooper from the Ohio State Highway Patrol stopped O’Malley based on the suspicion he was operating a vehicle under the influence (OVI).  O’Malley was unable to provide his address and, when asked for his license, gave the trooper his credit card.  The trooper arrested O’Malley and impounded his 2014 Chevrolet Silverado, valued at approximately $31,000.  O’Malley pleaded guilty to OVI, and he had two prior OVI convictions within the last ten years.  Accordingly, the trial judge in the Medina County Municipal Court ordered the forfeiture of O’Malley’s vehicle as part of the OVI sentence.

What Did the Lower Courts Say?
Before the trial judge ordered the vehicle forfeiture, the judge held a hearing.  During the hearing, O’Malley argued, through his lawyer, that forfeiture of the vehicle would violate two provisions in the federal Bill of Rights:  the Equal Protection Clause of the Fourteenth Amendment and the Excessive Fines Clause of the Eighth Amendment.  After hearing from the defense and the prosecution, the trial judge ruled the vehicle forfeiture did not violate either Constitutional Amendment.  O’Malley appealed the trial judge’s ruling to the 9th District Court of Appeals.  The appellate Court agreed with the trial court on both Constitutional issues and therefore affirmed the trial court’s ruling.

What Did the Ohio Supreme Court Conclude Regarding Equal Protection?
The Court reasoned that O’Malley’s claim of unequal treatment for vehicle owners did not involve a suspect classification or a fundamental right.  Consequently, the Court applied the ‘rational basis’ test.  The Court determined the vehicle forfeiture law is rationally related to the legitimate government purposes of deterring drunk driving and punishing repeat offenders.  Therefore, the Court held the OVI vehicle forfeiture law does not violate the Equal Protection Clause.

In determining the gravity of the offense, the Court deferred considerably to the Ohio legislature.  The Ohio General Assembly voted to include vehicle forfeiture as a penalty for certain OVI convictions because repeat offenders place others at risk of harm.  Although there was no harm caused in O’Malley’s case, drunk driving always causes a danger of harm to others.

What Does this Mean for Ohio OVI Law Going Forward?
As the decision in this case used an ‘as applied’ analysis, a future defendant could challenge Ohio’s OVI vehicle forfeiture law, claiming the law is unconstitutional ‘as applied’ to him or her.  Given the language and tone of the Court’s opinion in O’Malley, it seems unlikely such a future defendant would prevail.  As a result, vehicle forfeiture will remain as a penalty for certain OVI convictions in Ohio.