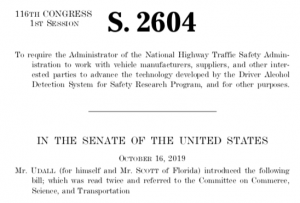 On October 16, 2019 U.S. Senators Rick Scott (R. FL) and Tom Udall (D. UT) have jointly proposed legislation known as the Reduce Impaired Driving for Everyone Act of 2019 or the RIDE Act of 2019.  According to Senator Scott’s website, the proposed law will “fund the technology transfer of federally funded research and development of advanced alcohol detection software – technology that detects whether a driver is impaired over the legal limit and, if so, prevents that driver from starting the car. This legislation sets up a pilot program for fleet deployment of vehicles equipped with this software with the federal General Services Administration, state and local partners, and private fleet owners.  It also requires a rulemaking to mandate installment of this software in every new vehicle. If all vehicles were equipped with this advanced alcohol detection technology, an estimated 7,000 lives could be saved every year. The bill is supported by Mothers Against Drunk Driving (MADD) and the National Safety Council.”

The official summary of this 2019-2020 bill (S.2604) states that the proposed law mandates, “… the National Highway Traffic Safety Administration (NHTSA) to work with vehicle manufacturers, suppliers, and other entities to advance the technology developed by the Driver Alcohol Detection System for Safety Research Program and other advanced drunk driving prevention technology with the goal of integrating such technology into new vehicles.

The actual language of Senate Bill 2604 may be found here. How this bill (if approved as a law) affects vehicle manufacturers and our current lives remains to be seen.  As of the end of July, 2020 the bill has been read twice and referred to the Committee on Commerce, Science, and Transportation.

The technology exists to make vehicles and our roads safer from intoxicated drivers—although more so from alcohol impaired drivers than drug impaired drivers.  Perhaps this will incentivize our government and vehicle manufacturers to make driving safer for all.  Even drunk driving defense lawyers are in favor of safer roads—as long as it doesn’t violate our constitutional rights and that the technology is accurate.