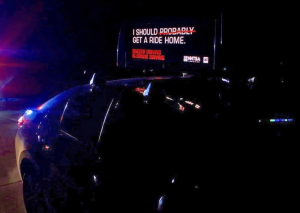 A motorist was stopped on I-80 in Berkley, California for weaving on the highway on February 24, 2019, according to USA Today.  While the driver was arrested for Driving Under the Influence of an Intoxicant (DUI/DWI), California Highway Patrol Officer Baza couldn’t help but notice the irony of the large sign on top of the vehicle.  It stated, “I should probably get a ride home” (with the word “probably” crossed out) and “Buzzed driving is drunk driving.”

Interestingly, the National Highway Safety Administration (NHTSA) pays motorists to drive around with anti-DUI signs on their cars.  Based on this case, the effectiveness of the signs appears uncertain.

He is the author of DUI: The Crime & Consequences in Tennessee, updated annually since 1991 (Thomson-West), and co-author with Lawrence Taylor of the national treatise, Drunk Driving Defense, 8thedition (Wolters Kluwer/Aspen).  Steve has served as an adjunct professor at the University of Tennessee Law School since 1993 and has received a number of prestigious awards for his faculty contributions.  He is a popular international speaker, having spoken at legal seminars in 30 states, the District of Columbia and three foreign countries.  In 2019, he taught at the University of Latvia Law School as a Fulbright Scholar.