Home / Georgia DUI News / Driving Under the Influence of Smartphones

Driving Under the Influence of Smartphones 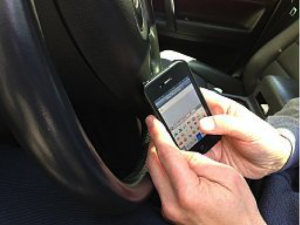 By IntelFreePress, via Wikimedia Commons.

Binge watching Netflix.  FaceTiming a friend. Scrolling through your Spotify playlist. All of these seem like harmless activities–until you try to do them while driving.

Due to the rise in distracted driving, lawmakers across America are rethinking their laws on smartphones in vehicles.

A study completed by AAA showed that 88% of millennial aged drivers acknowledge their dangerous driving habits, however, some of the drivers think that this behavior is acceptable. For example, the study showed that 78.2% of drivers believe that texting while driving is completely unacceptable, but 40.2% still admitted to doing it.  Unfortunately, the distraction is going beyond that of just texting and driving, with the latest distractions such as streaming videos.

According to USA Today, lawmakers across the country express that we live in a time of “instant gratification.”  This causes people feel the need to instantly respond to text messages, telephone calls, and applications such as Snapchat, even while driving. In response, many states are beginning to expand their smartphone restrictions.

For example, a new Georgia law that took effect on July 1, 2018 prohibits drivers from “…streaming video on their phones…holding a wireless device, watching or recording video, or texting while driving.”  According to a USA Today article, this law is in response to a fatal accident involving five Georgia Southern students who were killed when a tractor trailer hit their vehicle while watching football and responding to text messages on his phone while driving.  Georgia Rep. John Carson stated in an interview by USA Today that examples of these kinds of distracted driving is “…the DUI issue of our time.”

He is the author of DUI: The Crime & Consequences in Tennessee, updated annually since 1991 (Thomson-West), and co-author with Lawrence Taylor of the national treatise, Drunk Driving Defense, 8thedition (Wolters Kluwer/Aspen).  Steve has served as an adjunct professor at the University of Tennessee Law School since 1993 and has received a number of prestigious awards for his faculty contributions.  He is a popular international speaker, having spoken at legal seminars in 30 states, the District of Columbia and three foreign countries.

The author would like to thank University of Tennessee Law School student, Brooke Spivey, for her contributions to this article.