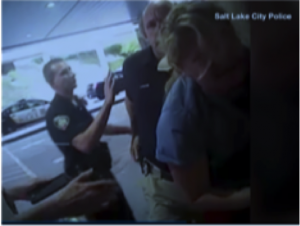 United States Supreme Court decisions sometimes have a greater impact on daily life than citizens may realize. On June 23, 2016, the decision Birchfield v. North Dakota[1] changed the procedure on how law enforcement is supposed to request a blood draw from those suspected of committing a crime such as driving under the influence.

The key phrase here is that it changed how law enforcement is “supposed to” handle drawing blood. As a recent news story from the Washington Post illustrates, the implementation of the correct procedures for drawing blood may be resisted more by some than others.

In Utah, the head nurse at the University of Utah Hospital’s burn unit was arrested for preventing a Salt Lake City police detective from forcibly obtaining an illegal blood sample from an unconscious patient. Under the Birchfield decision, an officer may only obtain a blood sample if the officer has either the subject’s consent to the blood draw or if the officer has obtained a search warrant authorizing the taking of a person’s blood. In this case, the officer had not obtained a search warrant, and the unconscious subject was not capable of giving consent to the blood draw.

The nurse explained to the officer that under the circumstances, she could not permit the officer to force a blood draw from the unconscious patient. Incidentally, the patient was not suspected of committing any crime; he had been injured as a victim in a car crash involving another person suspected of driving under the influence. The suspect did not survive the crash.

In spite of the nurse’s calm and respectful explanation that she could not permit the blood draw—a decision that was reiterated over the telephone by her supervisor—the officer became belligerent when denied the option of obtaining a blood sample. He shoved and grabbed the nurse, handcuffed her, and forced her into an unmarked vehicle, accusing her of interfering with an investigation.

The entire altercation was recorded on the officer’s body camera, and there is no question that the nurse was absolutely legally correct when she did not allow the officer to forcibly obtain the blood sample. Since the incident, the Police Chief and the Salt Lake City Mayor extended a personal apology to the nurse, and the officer involved has been placed on administrative leave pending a criminal investigation into the officer’s conduct.

Thankfully, the nurse was a former Olympian athlete who had enough acumen and resolution not to let a rogue officer force her to violate the unconscious patient’s constitutional rights. We all need to stand up for our constitutional right against unreasonable searches and seizures. If not, they will soon disappear.