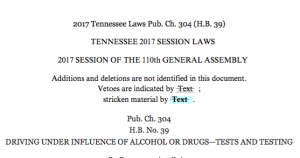 Effective July 1, 2017, Tennessee is making sweeping changes to its Implied Consent Law[1] in an apparent attempt to comply with the recent U.S. Supreme Court decision, Birchfield v. North Dakota, 136 S.Ct. 2160 (2016).  The Implied Consent Law and the Birchfield decision both address legal issues surrounding chemical tests to determine the alcohol and/or drug content in a person’s system. Specifically, they deal with the question of when and under what circumstances a blood or breath test may be requested or required, and the procedures a law enforcement officer must follow in order for the results of that test to be admissible in court.

The most notable change to the Tennessee law, derived directly from the Birchfield opinion, is that the statue creates two distinct categories of chemical tests: breath tests and blood tests. In the Birchfield opinion, the U.S. Supreme Court held that breath tests and blood tests are fundamentally different types of searches within the meaning of the Constitution. Therefore, each requires separate standards for determining the constitutionality of the specific test.

The new version of T.C.A. § 55-10-406 mirrors this distinction. Each type of test has its own standards for when and how to administer the test so that its results are admissible in court. It is worth noting that urine tests to determine the alcohol or drug content in a person’s system are no longer even mentioned in the statute as an alternative to be requested by the officer.

Except in the three scenarios listed above, the officer’s decision to administer a breath test is discretionary when the officer has probable cause to believe the driver has committed one of the above five enumerated offenses. The 2017 Implied Consent Law lists five circumstances under which a breath test may be administered: (1) implied consent; (2) actual consent; (3) pursuant to a search warrant, absent consent; (4) incident to a lawful arrest; or (5) when the breath test is mandatory, as discussed in the previous paragraph.

Stay tuned for further discussion of this new law in the near future.