Home / Tennessee DUI News / What Actually Happens In Your Body When You Get “Drunk”?

What Actually Happens In Your Body When You Get “Drunk”? 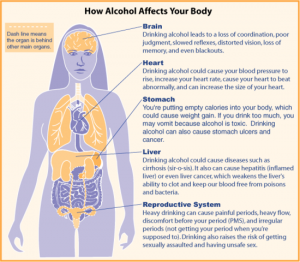 Drunk driving can lead to being arrested for Driving Under the Influence (DUI). Being arrested can add to the serious “hangover” you may have after consuming that much alcohol. But most people are not aware of what actually happens to your body once all that alcohol is consumed. Ash M. Richter has authored an article, “Every Time You Get Drunk, This Is What Happens To Your Body And Your Brain,” that explains the science behind the hangover.

The consumption of alcohol does not just occur in your mouth, but it travels down your esophagus and into your stomach and small intestines. At this point, as Richter explains, some alcohol is beginning to soak into your body and blood stream. While waiting in the small intestine, any alcohol that was not absorbed by food in the stomach will begin to seep into the blood stream—which leads to a fast spreading of the ethanol in your body. Once the ethanol (or any substance for that matter) enters the blood stream, the intoxicant moves as quickly through the body as your blood does.

While the alcohol is being absorbed into the blood stream and lungs, your liver is working overtime to “detox” your body and rid your system of the alcohol. The by-product of this detoxing, however, is called Acetaldehyde, which is a vinegar-like substance that causes the nauseated feeling you may have after a long night of alcohol consumption. The headaches, vomiting, and heartburn may also be reactions to the Acetaldehyde produced by the liver.

After the liver completes its task, the detoxified alcohol remains are transported to the kidneys, which attempt to dispel the newly created waste through the bladder. In other words, the kidneys are the last stop before the bladder receives the liquids to remove the remains of the alcohol from the body. To aid in the process of expelling these toxins from your body, the article points out that the body pulls as much hydration as possible to discharge the toxins through the bladder. Hence, the reason you suffer from a headache on the morning after: your brain feels the results of the dehydration first, then the after-effects of the alcohol elimination process.

Previous: MASSACHUSETTS HIGH COURT SCHEDULES HEARING REGARDING EVIDENCE OF DRIVING UNDER THE INFLUENCE OF MARIJUANA
Next: Bank Executive’s Attempt To Keep DUI Out Of The Paper Backfires Spectacularly