Tennessee Adopts a (Limited) Good-Faith Exception to the Warrant Requirement 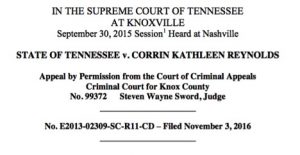 In Reynolds, the court held that obtaining a blood sample without a warrant was done by the officer in objectively good-faith reliance on binding precedent. The arrest of Ms. Reynolds occurred prior to the Supreme Court ruling in Missouri v. McNeely,[5] which differed in its interpretation from the Tennessee courts interpretation of another U.S. Supreme Court case, Schmerber,[6] as establishing a broad categorical rule that the natural dissipation of alcohol within the bloodstream always presents an exigent circumstance, justifying a warrantless blood draw in every drunk driving case. See, e.g., Humphreys, 70 S.W.3d 752, 761.[7]

Although the Reynolds exception is intended to be very narrow and is not meant to become a blanket good-faith exception—that is, it only applies when the officer was relying on binding precedent at the time that was later overturned—the dissent points out that the “binding precedent” relied upon in Reynolds was not as clear-cut as the majority opinion implies.[8] Rather, the “binding precedent” case was decided on other grounds, and the Court of Criminal Appeals merely mentioned in dicta, citing an unpublished case, that the dissipation of blood falls within the exigent circumstance exception to the warrant requirement.[9] The dissenting Justice voiced her concern: “Given the prevailing confusion surrounding Schmerber, the Court of Criminal Appeals’ dicta did not rise to the level of “binding judicial precedent,” particularly for the purpose of adopting a good-faith exception [to the Constitutional protections guaranteed to our citizens].”[10]

It remains to be seen whether the Reynolds decision will open the door to further erosions of constitutional rights with loose interpretations of “binding precedent” or if it truly will be a very limited exception for warrantless blood draws taken prior to the Missouri v. McNeely decision.

Previous: MAN DIES AFTER HE WAS STOPPED FOR DWI IN CUMBERLAND COUNTY
Next: Off-duty Cape Coral officer crashes into house; DUI suspected