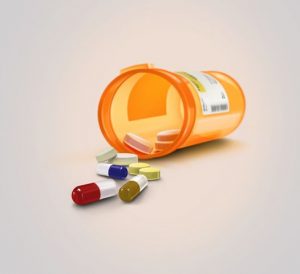 During your next visit to your doctor, she prescribes a muscle relaxer, or a “nerve pill” or cough syrup (your choice). You stop by the pharmacy and take the prescribed amount while there because you need immediate relief. On the way home, you are stopped at a red light when you are rear-ended. Once the police arrive, you are ultimately arrested—even though you did nothing wrong! Can this be legal? Unfortunately, it occurs far too frequently. Most people are unaware that one may be violating the law when taking medication—even if prescribed by their physician—and then driving.  Most anxiety and ADD medications, over-the-counter cold medications, and a variety of pain medications affect your central nervous system, thus making it illegal to drive if one’s ability to do so is impaired—even a little bit. Legally taking the medication is an entirely distinct issue from whether you should drive while taking the medication.

Most states have laws that specifically negate the argument that the medicine was lawfully prescribed and taken as directed. For example, in Tennessee, Tennessee Code Annotated § 55-10-411(e) states that legal entitlement to use such intoxicant does not constitute a defense to the crime of DUI. The issue is not whether the drugs were legally taken as directed; the issue is whether the person’s ability to drive is impaired because of the medication.

But what if someone does not realize that the medication they took caused impairment? In most states, ignorance is not an excuse. For example, in Tennessee, the argument that you did not realize the medication would affect you, either from its own side effects or in combination with something else, does not constitute a defense to a DUI charge except in very rare circumstances.

Although there is a defense called “involuntary intoxication,” generally this only applies if the intoxication is attributable to a trick, accident, or coercion (for example, something slipped into a drink when you are not watching). If you voluntarily take something, even if you have no reason to believe that it will impair your ability to drive, the involuntary intoxication defense is moot.

Although the presence of drugs may be established through a blood test, it is usually the arresting officer who notices details that indicate suspicion of drug impairment. Very few officers are actually trained to recognize symptoms of drugs or medications, however. Although there are training courses through which an officer may become a Drug Recognition Expert (DRE), this certification is by no means standard training for most law enforcement officers. Moreover, many scientists and defense lawyers (including this author) believe this certification is based on suspect science.

While alcohol’s effects are generally similar in most people, the effects of prescription and over-the-counter drugs are much more complicated. It is more difficult to prove impairment (or lack thereof!) because drugs affect people so differently. Dosage, unexpected side effects, combinations of medications, and timing all must be considered before driving while on a medication of any kind. In general, the following are good guidelines to follow: (1) Always check with a doctor and your pharmacist about possible side effects/warnings/mixing a new prescription with other medications; (2) Never mix prescription or over-the-counter medications with alcohol; and (3) Never take someone else’s medication, even if it is something you have taken previously.