Blood, Breath and Birchfield v. North Dakota — Why it matters 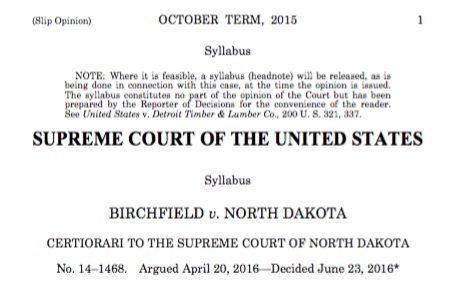 On June 23, 2016, the U.S. Supreme Court published an important decision affecting our right of privacy.  Birchfield v. North Dakota[1] was presented to the highest court in the land due to the enactment of legislation in several states that penalize DUI  suspects who refuse to submit to a chemical test with not only drivers’ license suspension or revocation, but also criminal penalties. Such laws present the accused with an impossible choice—forgo the constitutional right to be free from warrantless searches or suffer an additional criminal charge.

In a somewhat surprising turn, the Court announced a clear distinction between cases involving breath tests and those involving blood tests.[2] The distinction is based on the level of intrusion into the privacy of the individual that is required for each test. The Court found that a breath test is a valid search incident to arrest, but a blood test does not fall within any exceptions to the warrant requirement.[3]

For instance, the Court noted the difference in the degree of the physical intrusion into the body necessary to obtain each sample. For a breath test, the only physical intrusion is a small mouthpiece inserted between a person’s lips.[4] For a blood test, however, a needle is required to pierce the skin.[5]

The nature of the sample obtained is also distinct. The Court considered that breath is something naturally expelled; a person cannot keep one’s breath inside their lungs indefinitely and still live. All a person’s breath, including the deep lung air used in a breath test, will eventually be exhaled through normal processes.[6] Blood, on the other hand, is not naturally expelled. It is bound beneath the skin and is not continually shed.[7] Although people do voluntarily provide blood samples for other reasons, such as medical tests, “the process is not one they relish. It is significantly more intrusive than blowing into a tube.”[8]

After balancing the privacy interests of individuals with the strong governmental purpose of protecting citizens from drunk drivers, the Court came to a two-part conclusion because of the difference in the nature and extent of the intrusiveness of each test.[9] The Court deemed a blood test to be “significantly more intrusive” than a breath test.[10] Based on this determination, a suspect has a constitutional right to refuse a blood test without a warrant, but a breath test is categorically permitted without a warrant as a search incident to arrest.[11]

Two Justices, Justice Sotomayor and Justice Ginsburg disagreed in part with the majority of the court. Although Justice Sotomayor agreed that the Fourth Amendment prohibits warrantless blood tests, she dissented with the Court’s holding that warrantless breath tests are permitted.[14] In her view, “Because no governmental interest categorically makes it impractical for an officer to obtain a warrant before measuring a driver’s alcohol level, the Fourth Amendment prohibits such searches without a warrant, unless exigent circumstances exist in a particular case.”[15] In her opinion, both breath and blood tests needed to be considered on a case-by-case basis under the “exigent circumstances” exception to the search warrant requirement of the Fourth Amendment.[16]

Unfortunately, the majority opinion in this case further dilutes the rights of privacy of those simply suspected of Driving Under the Influence of an intoxicant. Keep in mind, though, should the constitution of a particular state protect one’s privacy to a greater degree, a different outcome may result in that state.  Those interested in reading the entire opinion may access a .pdf version by clicking here:  Birchfield v North Dakota Opinion