The Uber Effect – Safety May Be Just One Click Away

Launched in 2009, Uber has transformed travel habits through its popular and efficient system of matching potential passengers to Uber drivers and instantaneous wireless payments.  By virtue of Uber’s app or website,[1] individuals may personalize their means of transportation by price and vehicle type.  Expanding to over 200 cities world-wide, Uber has become a viable travel alternative for many. [2]

Uber’s success derives from its claim of economic efficiency, expediency and ability to match potential riders with readily available drivers. Thus, as ride demand increases, for instance, on weekends when alcohol consumption traditionally surges, Uber’s fares increase as well – thus providing incentive for more drivers to become available.  An increase in transportation seems to result in a negative correlation to alcohol related traffic violations as concluded by research performed in Seattle and San Francisco, before and after Uber’s debut. [3]

To ensure accuracy, the case study utilized the “differences-in-differences” technique to eliminate random  data shocks by comparing the average change of alcohol-related traffic violations over time in the treatment group’s (Seattle) outcome variable to the average change over time for the control group’s (San Francisco) same variable.  The results reveal that Uber’s availability resulted in approximately -.7 DUIs per day or a 10% overall reduction in the amount of DUIs. [4]  Thus, it appears, at least according to Uber’s blog, that a potential drunk driver would rather not risk driving given that an alternative is available. 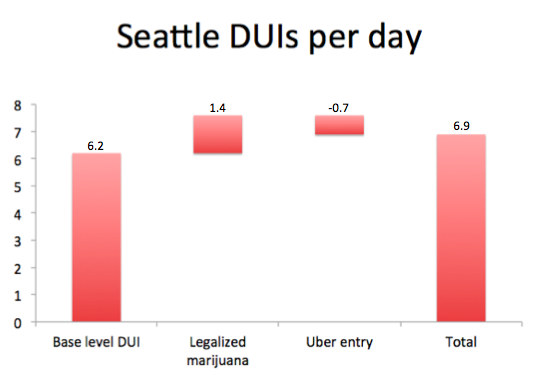 In conclusion, drivers should remember to avoid operating a vehicle after consuming alcohol or any other intoxicant – legal or illegal.  Available transportation alternatives, such as Uber, provide an alternative to risking arrest – or worse.

He is the author of DUI: The Crimes & Consequences in Tennessee, updated annually since 1991 (Thomson-West), and co-author with Lawrence Taylor of the national treatise, Drunk Driving Defense, 7th edition (Wolters Kluwer/Aspen).  Steve has served as an adjunct professor at the University of Tennessee Law School since 1993 and has received a number of prestigious awards for his faculty contributions.  He is a popular international speaker, having spoken at legal seminars in 23 states, the District of Columbia and three foreign countries.